Brexit report: In or out, what’s the impact on Sterling?

On 23 June the British public will go the polls and decide the fate of Britain’s membership of the European Union.

While we expect the ‘in’ vote to prevail, the possibility of a Brexit can’t be ruled out. Opinion polls have generally shown the ‘in’ campaign to be ahead, albeit by a narrow margin which shrank further following the attacks in Brussels. In our opinion, odds of around 33% chance of a Brexit seem roughly in line with the polls.

Concerns of a Brexit intensify

Despite the ‘in’ campaign’s lead in the polls, it’s become increasingly apparent that investors are genuinely concerned about the chance of a Brexit and its potential effect on the UK economy.

GBP/EUR has traded mostly in tandem with the Standard & Poor’s 500 index over the past six months. However, this has shown a noticeable divergence since mid-February when the market began pricing in the risk of a Brexit (Figure 1). 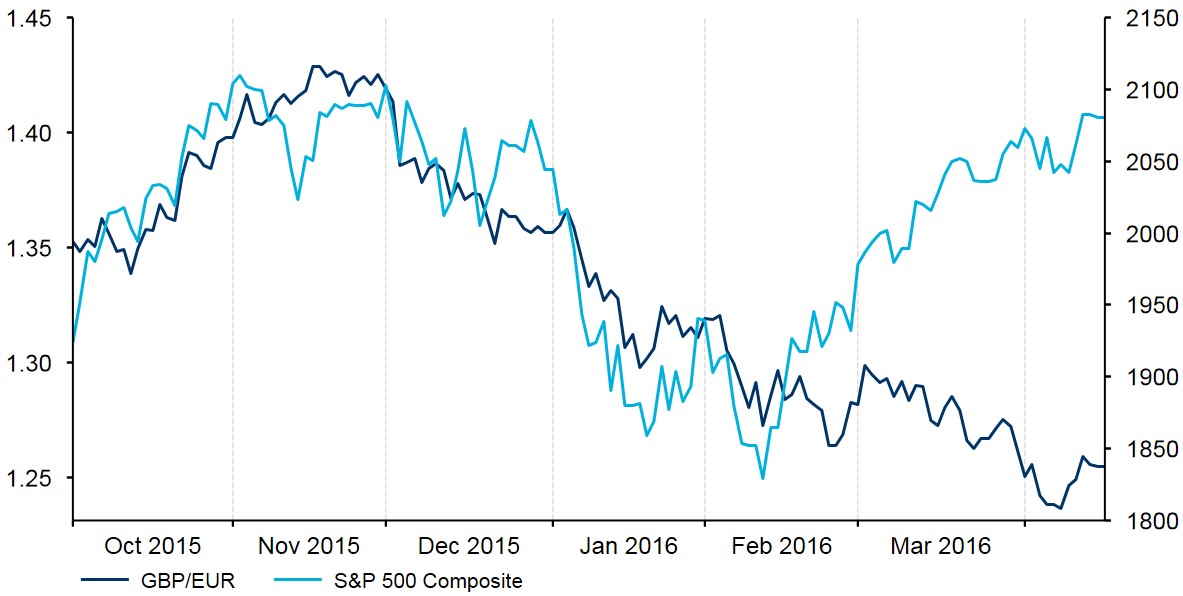 Implied volatility in Sterling, widely seen as the most accurate measure of foreign exchange market fears regarding a Brexit, has also increased drastically since the turn of the year. Both one year and six month implied volatility in GBP/USD are now higher than the same measures for EUR/USD (Figure 2), having historically been lower ever since the introduction of the single currency in 1999.

Expectations for the first post-financial crisis interest rate hike by the Bank of England have been pushed further into the future, due largely to EU referendum jitters. Market pricing suggests we won’t see a UK rate increase until 2019, with a non-trivial chance of a rate cut over the next year.

In the event of a Brexit, we’d expect a sell-off in Sterling. However, it’s extremely hard to predict the extent, given the lack of historical precedent.

The closest event in recent memory would be when Britain was forced out of the Exchange Rate Mechanism (ERM) during ‘Black Wednesday’ in September 1992. Sterling dropped 15% against the US Dollar and the German Mark in the space of just a week, ending the year 25% lower against the Greenback (Figure 3).

However, that dramatic decline was from an excessive level, whereas in this case Sterling has already depreciated substantially against the US Dollar and the Euro.

The Pound is currently trading around 14% lower in trade weighted terms than it did prior to the removal of the ERM in 1992 (Figure 4). This would suggest the Pound has less to fall in the event of a Brexit than it did following the withdrawal from the ERM. 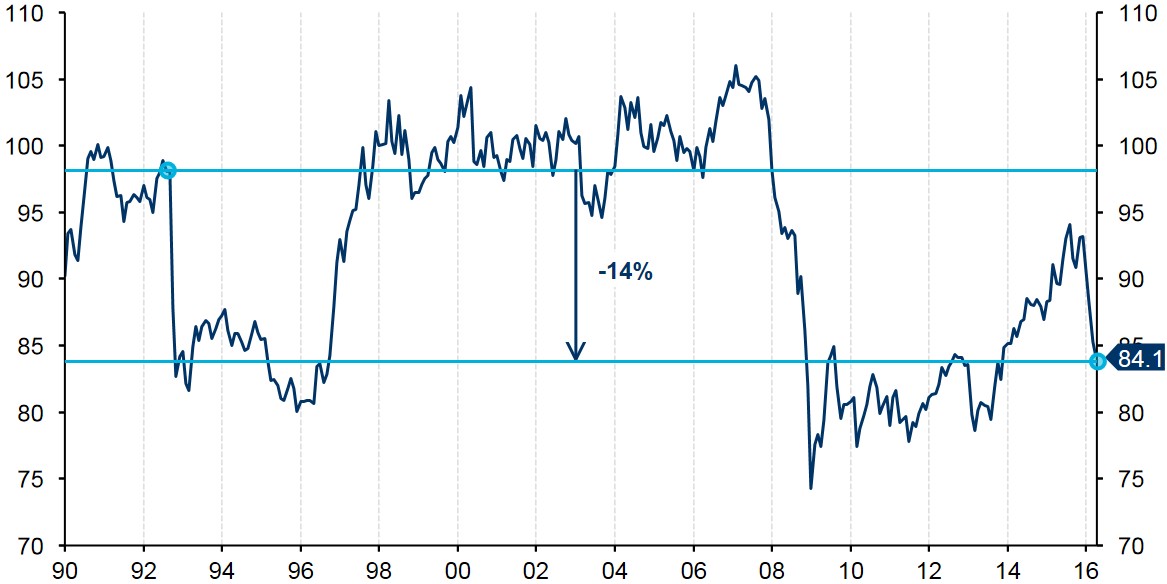 We do not anticipate a decline in Sterling to the magnitude witnessed in the early 1990’s, let alone the 20% depreciation suggested by Goldman Sachs.

Next move from the Bank of England?

It would be interesting to see the Bank of England’s reaction in the event of a Brexit. We would expect the Monetary Policy Committee to issue an emergency interest rate cut and flood the markets with liquidity in order to maintain monetary stability.

By contrast, an ‘in’ vote would cause markets to quickly remove expectations for a rate cut and start pricing in the chance of a hike at some point in the following 12 months.

As we expect the ‘in’ campaign to be successful in this summer’s EU referendum, we still forecast the Bank of England to hike interest rates in the final quarter of 2016.

Concerned about the impact of Brexit volatility on your business?
Discuss currency risk management strategies with our specialists

Print
Previous post
What does the future hold for the South African Rand (ZAR)?
Back to blog
Next post
Dollar remains under pressure while Yen soars following central bank meetings